longtime exposures with an image pro

Some saturday ago I was giving a workshop about the Image/Spectra cameras by polaroid in the impossible project space vienna. Thus of course long time exposur had to be tried out again when I was standing infront of the university in vienna some weeks ago. The black and white pictures are all dead but I like the colour pictures, scans are unfortunately a little bit too dark. As written multiple times, I need a new one... Lens was open eight to twelfe seconds, 15 perhaps would have been better but I realized this 40 mins later ;) Still, the image pro is a great camera 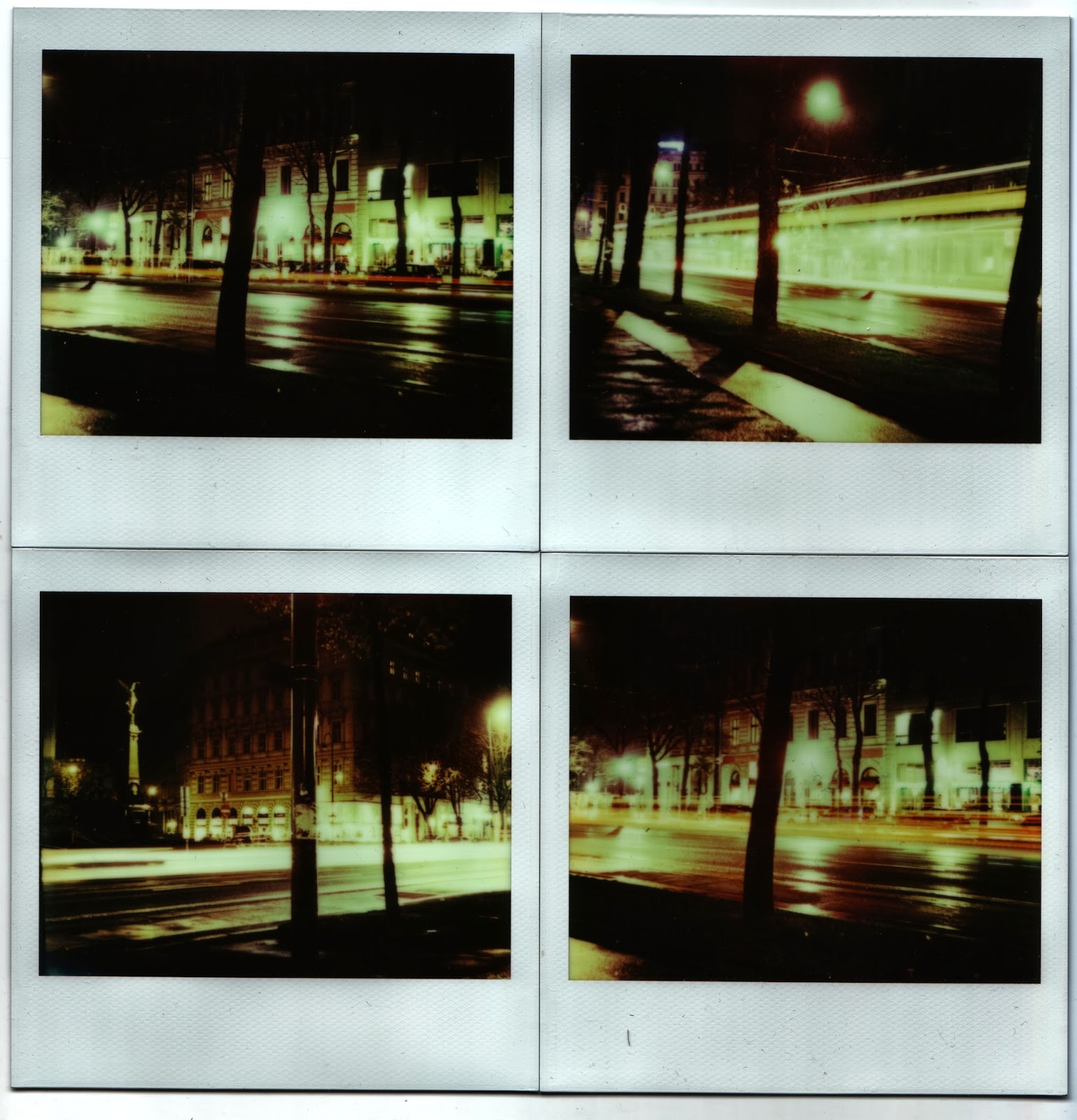 The Close Up Stand and the pz680

For a long time I wanted to check again how the impossible films are working with the Close Up Stand. The flyer of the current exhibition in Ostlicht motivated me enough to do a short test series. And the test series motivated me to really buy a new scanner, any suggestions?

I did always two pictures, one in the middle and one over exposed. As you can see on the right the over exposure is still absolutely necessary. But the colours are far far away softer then reality. I used a 06/2013-film, perhaps this has some influence but also during my tests in summer I was missing the powerfull colours of px680 and px70... :( 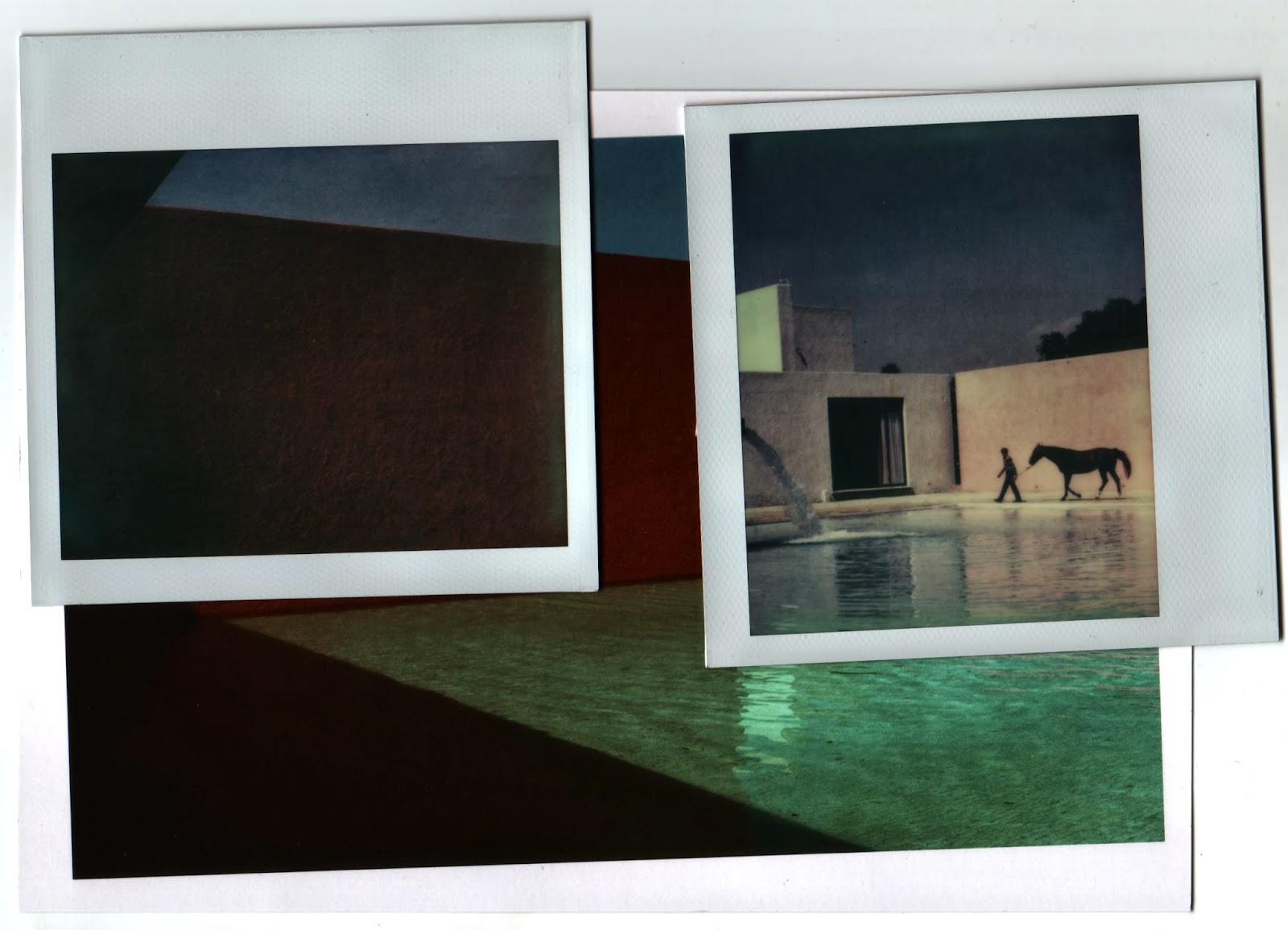 So, it seems like fuji copied the instant lab with its new instax SHARE Smartphone Printer SP-1. It's basically the same idea, some integral material gets exposed and ejected like in a fuji- or polaroid-camera (or the instant lab).
So where is the difference?
- the instax share has almost the same size
- the pictures are smaller (and personally I don't like the instax mini format)
- the picture is not mechanically transferred by the iPhone-display, it is transferred via bluetooth on a 640x480 screen (which means 254 dpi) and thus the picture is exposed.

Personally I don't like the instant lab but this one sounds worse. Especially the last point, since bluetooth is famous for not working and also even the iPhone 4 has 326 dpi with its 960x640 resolution. Can someone tell me if this difference matters? Oh, and since Fuji stopped the FP-3000 integral film, there is another reason not to buy something by Fuji again ;)
Keine Kommentare:
Diesen Post per E-Mail versendenBlogThis!In Twitter freigebenIn Facebook freigebenAuf Pinterest teilen 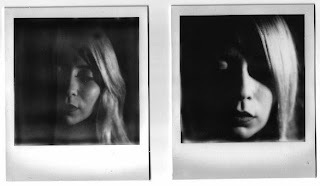 As I was writing some weeks ago, impossible changed it's recipe for their PX600 and PX100, now called B&W Film for 600. I tried it today in my SX70 AF with fixed aperture 8, flash and aperture control was the same. So what we see is that the white in the new film is much brighter and the black much darker, it seems like there's a smaller aperture tollerance. Also it needs a little bit less light and for me the old generation film (this time 05/13) looks a little bit more dirty/analog/callitwhatyouwant. 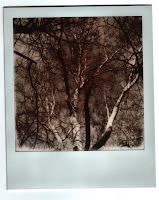 Unfortunately it seems that we still have to remove tanks and sponge, here a picture some weeks (four?) old. I found an unopened box at my grandmothers place. Inside where five miniportrait cameras
WTF? No idea, when I bought them... 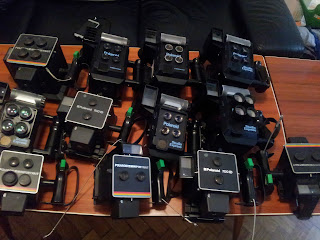 Together with my other polaroid passport cameras I now have a lot of them. To be more accurate, too many...

Anyone needs one? I am selling the whole camera with a 600SE-packfilmback, or just the camera or just the broken one for decoration (I removed the 600SE female-back of two studio express, oh and by the way, anyone want a 110a-600SE-conversion???)
Keine Kommentare:
Diesen Post per E-Mail versendenBlogThis!In Twitter freigebenIn Facebook freigebenAuf Pinterest teilen
Labels: 402, 600SE, 700 ID, miniportrait, packfilm, sale

Somehow I had the feeling to blog again today! Yes, I know! It has been a while. Somehow the motivation I had at instant addicts is gone. But I stop crying now and tell you something about camera porn. Simon and I, we are really no great fotographers. At least he isn't. And most time when we work together, we are drunk, but! but!  our biggest fun is building, cutting, destroying and sometimes repairing cameras. Shortly before Christmas when we finished our 110-SE-mods I started the idea of a perfect SX70 set. Some time ago, perhaps more than a year, I built my first f8-SX70. This is a really nice and special camera but you always have to use a flash (the bigger the flash the better). This time I tried the opposite, avoiding flashes as long as possible (and it was/is quite simple).
Motivated by mints SLR670 and unmotivated  by its price I took one of my Revue models and started collecting stuff. I wanted to use the PX600 and PX680 in it. I used the first one very often with pretty strong yellow and red filters but was always stressed when I was too lazy for adding a filter or didn't want to use a filter at all. But anyways, the filter-set went in the bag, also some 600-films. The filter holder is the reason I'm not using a SX70AF.

I added the magnet ring of a slr680 to use the crappy crappy 2.0 lens (which is so crappy, it's awesome again).

Also a small tripod was added and the tripod was also the reason I am using my revue. All my other SX70s don't have a tripod stand but since selfie is word of the year and I have a self timer and a remote control cable I of course need a tripod with me!
Now I removed the face of this good fellow, cutted it a little bit so it fits to my revue and removed the ND-filter. I got this idea some years ago by Noah Kolb (dude your homepage is down so I couldn't link it). With the reomved ND-filter the camera acts faster. Thus you can use the 600s-impossible series with some aperture control. Also the 600 film is awesome with the weak weak crappy crappy mintbar on it. So, with a SX70 film inside I use the camera as always and by night I put an awesome flash bar on it.

The new black and white film by impossible

Suddenly in 2013, Impossible black and white Pictures started to fade to orange again. Thus people had to start again, removing the pads and additionally use a dry age kit. Except of this, the new BW-film has had a great quality for some time now.

Impossible announced itsnew film some hours ago, not any longer with Ilford as a partner (they were blamed for the sepia/orange problem).
You can guess which two pictures were shot with a SX70AF modified to fixed aperture 8 on the old film and which by an iphone5 and an instant lab (thanks Julius for the shot).
Somehow the new film looks too perfect for me but perhaps it's the different camera. So hurry up and get some new films for testing. I'll do it tomorrow.
Keine Kommentare:
Diesen Post per E-Mail versendenBlogThis!In Twitter freigebenIn Facebook freigebenAuf Pinterest teilen
Ältere Posts Startseite
Abonnieren Posts (Atom)